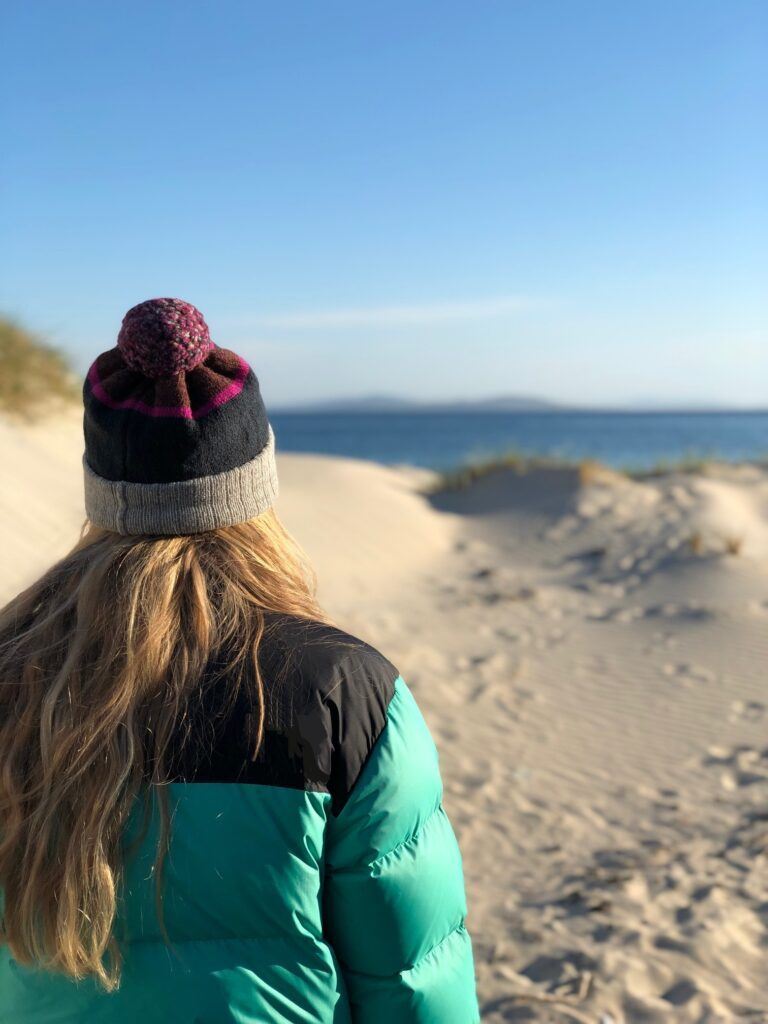 With a van packed full of everything we could possibly need, Josh and I set off early on Sunday 12th May for our camping trip to the Outer Hebrides!


The first pit stop on our journey was Fort William to stretch our legs and grab some lunch. We opted for Deli Craft which had a grand selection of handmade sandwiches and pizzas which tasted as good as they looked. Hopping back in the van we reached the Skye Bridge! This was my first trip this far north of Scotland, and I must say, it’s gorgeous up there. The landscape looks almost otherworldly. The glorious sunshine only added to its beauty.

We headed for the Fairy Pools, the first attraction on our list. Located at the base of the Cuillin mountains are a series of natural pools and waterfalls. They are named after the crystal clear water in varying hues of blues and greens which are said to give off a mystical atmosphere. Should you be brave enough, this is a popular spot for some wild swimming.

After our first night of wild camping we made our way to Neist Point Lighthouse, the most westerly tip of Skye. Here it was blowing an absolute hooley and a wooly hat was definitely a must. The lighthouse was first opened back in 1909 and supplies for the residents had to be transported down by aerial cable. However by 1990, the lighthouse had become automated and no longer required daily maintenance. Although an easy climb down, the returning journey was pretty steep. I stopped a few times to catch my breath and admire the view.

Situated on the east coast of the island is Portree, the capital of Skye. We had a wander round the town, had a spot of lunch, and visited a local craft market. I would highly recommend visiting the Isle of Skye Ice Cream shop if you fancy something sweet. I went for a waffle cone with banoffee ice cream – delish. While we were there we also popped into ÒR, a lovely local shop which keeps a curated collection of art prints, homeware, and accessories – including our very own Wonky Woolies hats!

The iconic Old Man of Storr is a large formation of rock and part of the Trotternish ridge. It is located in the north of Skye and is probably the most popular hike on the island. There are a few stories of how the landmark got its name – with some people believing the protruding pinnacle to be that of a giant’s thumb however others claim you can see the features of the Old Man himself in the rocks. This climb might be a doddle to some, like Josh who took off like a mountain goat, or those like me – plodding along taking in the scenery. I still made it to the top!

On the morning of Tuesday 14th May, we caught the CalMac ferry from Uig to Tarbert in Harris. Fresh from the sea, we made our way to the Isle of Harris Distillery for a tour and a tasting. Every bottle of Harris gin is distilled and bottled on the island. Everything from the botanicals used in the gin to the design of the bottle, is inspired by the Outer Hebrides. While they have already perfected their gin recipe, the distillery has been working away producing their own single malt whisky, The Hearach. Should you be planning a visit to Harris, I would highly recommend the distillery tour. It was incredibly informative and engaging, Our tour guide was so passionate about the opportunities the distillery has brought to the residents of the Outer Hebrides. We of course came away with a bottle of gin for ourselves!

On Tuesday afternoon, we headed to Seilebost and picked up Nora from Harris Classic Campers. Isn’t she a beauty? A 1967 Volkswagen campervan all the way from California and lovingly restored by Alan – proud owner of all three campers. Nora’s cab remains untouched and is the same set up she had 52 years ago. Therefore a bit daunting to drive on the single track roads of the Outer Hebrides when we were first set loose with her!

The camper was kitted out with everything needed for camping, including the kitchen sink! Bedding, cooking utensils, cutlery, – even a pair of deck chairs. You name it she had it. Sleeping in the camper on the Rock & Roll bed was a real treat compared to the tent. The curtains and cushions made by Alan’s wife Ellen made it feel so homely.

The Callanish Stones are located on the west coast of Lewis. They have stood tall for over 5000 years and are one of the most complete stone circles in Europe. No one is quite sure of the stones origins but they are believed to have been used for observing the moon and stars. Although, legend has it that the stones are in fact giants who were petrified into stone right where they stood.

We were lucky when we found this spot on the west coast of Lewis. Apart from a few sheep it was pretty secluded so we parked up for the night, cracked open the gin and enjoyed the view. It’s hard to believe that some of the beaches on the Outer Hebrides are even in Scotland. The white sand and turquoise water looks inviting but as soon as you dip a toe in you are quickly brought back down to earth and reminded yes, this is Scotland. We were so lucky with the weather the entire week and caught some gorgeous sunsets.